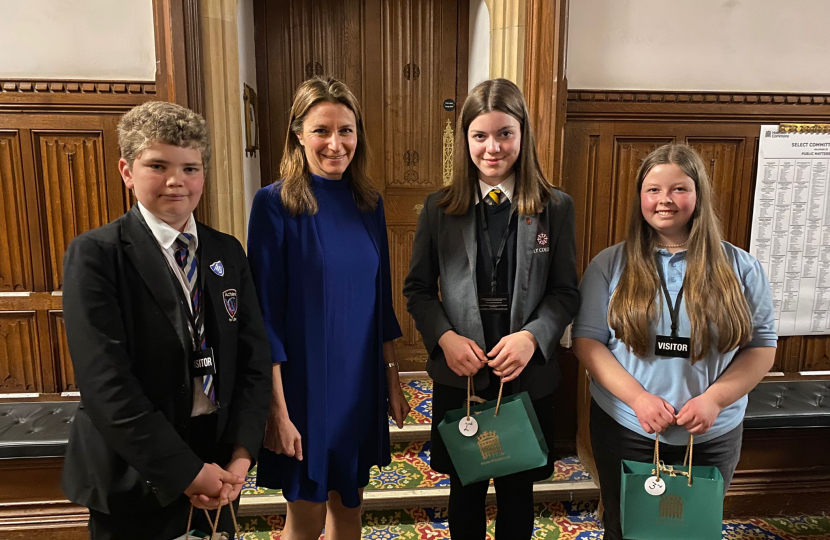 I was pleased to welcome students from South East Cambridgeshire to Parliament last week as part of my annual Schools Debating Competition.

The first debate, ‘This House believes that Scotland should remain part of the United Kingdom’ saw two teams debate the motion. Ben, Archie and Roxie spoke in favour of the motion, and Charlotte, Phoebe and Olivia spoke against. Reasons offered by the teams included the democratic deficit, issues around currency and the cost to the UK of some services.

The second debate, ‘This House believes that animal testing is unnecessary’ was proposed by Iona, Rupert and Hannah and opposed by Reece, Freya and William. The teams talked about the future of antibiotics, animal testing in the COVID vaccines and safety in their arguments.

The competition was judged by Alex Chalk, MP for Cheltenham and Solicitor General. Chalk offered the students practical advice on giving a speech, including how to construct persuasive arguments and importance of the peroration - the concluding part of the speech - leaving the audience with a finale that they will remember.

Following the debate, students and teachers were taken on a tour of the Commons chamber, voting lobbies and Members’ Lobby.

It was fantastic to welcome students and teachers back to Parliament for my annual debating competition. This is a highlight of my parliamentary year, and the arguments and standard of debate by those taking part were very convincing.

Congratulations to the winners - Reece, Charlotte and Phoebe who were selected for their overall high standard of debate and thank you to all those who took part.

I look forward to next year’s debate!