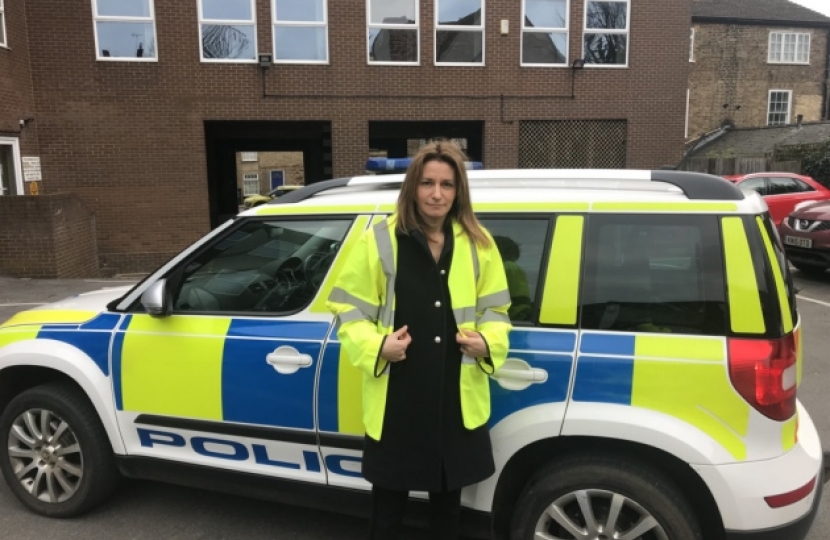 Towards the end of last year, I shadowed a constable from Cambridgeshire police to gain a better insight into day to day policing and the efficacy of the criminal justice system.

Modern day policing has brought with it a whole host of new demands.  Police now have to spend more time tackling ‘hidden crimes’ such as domestic abuse, child sexual exploitation and modern day slavery. They are, also, often called on to spend time helping vulnerable individuals in a mental health crisis where they may be a risk to themselves or to the general public. What’s more, our county is one of the fastest growing, with the population set to rise by 20% by 2031. This all puts added pressure on our local police force.

Relatively speaking, we live in a safe county.  Latest ONS crime statistics released in October for the year ending September 2018 showed an 0.8% increase in recorded crime in Cambridgeshire compared with an increase of 8% overall in England and Wales.

Knowing that we have less crime than elsewhere is reassuring but it is of little comfort when crime occurs near where we live.

Towards the end of last year, I attended a number of open meetings in villages where there had been a perceived increase in crime.  I was heartened by how effectively the individual communities were working hand in hand with the police. How communities had come together to help tackle the crime and were effectively assisting the police by providing information in a well organised and cohesive way.

In December, the Home Office announced additional police funding of £970 million to enable police forces to recruit more officers.  This is the largest increase in police funding since 2010.  As part of this funding settlement, police and crime commissioners have been given the flexibility to increase council tax contributions to policing.

Thanks to extra funding and public support, Police Officer numbers in Cambridgeshire are set to increase for the second year running. The challenges are enormous but we have a dedicated, hard working force committed to protecting our community.

Information to readers:  The best ways to contact the police with information, or to address concerns are as follows: Telephone – 101 and always 999 in an emergency / Online – www.cambs.police.uk (there are simple and effective online reporting mechanisms available).  Anyone who is fearful of making reports or providing information to the police can always use the CrimeStoppers service in absolute confidence and anonymity – 0800 555 111