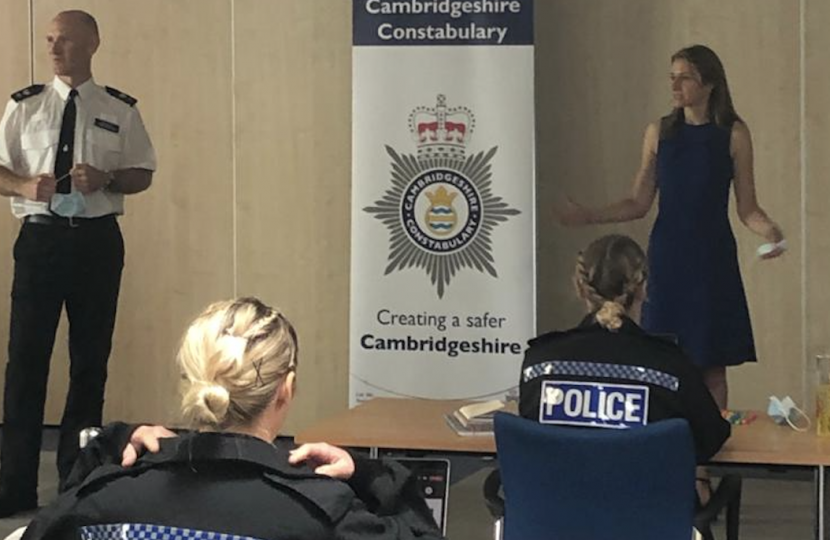 Rural crime is a significant issue which affects my constituents every day and I work closely with the Cambridgeshire Constabulary, the Police and Crime Commissioner, the National Farmers Union and other local MPs to try and improve the situation for my constituents.

One particular issue of concern is hare coursing. The local police force have provided three extra police officers on the rural crime team to specifically tackle this matter. Additionally, I have held discussions with Cambridgeshire Police to see how myself and other local MPs can work together to bring about stricter changes to the law.

As a constituency MP, I know unauthorised encampments have been an increasing problem for a number of years. I have worked closely with the Police and the councils on this matter and have seen, first hand, the limitations of the existing powers of enforcement. During a debate on this subject in the House of Commons in October 2017, I called on the then Home Secretary, to address what more could be done.

I was therefore pleased that in response to MPs across the board relaying the frustration and distress felt by their constituents, the Home Office launched a consultation on strengthening police powers with regards to unauthorised traveller encampments. This consultation looked at how the Government could criminalise the act of trespassing when setting up or residing on an unauthorised encampment and whether this would be preferable to extending the current powers police have to direct trespassers to leave land. The consultation closed earlier this year and the Government is now considering all the responses to determine the next steps. I will update constituents once the findings of the consultation have been released.

During the Covid-19 pandemic I have increasingly been contacted by residents related to issues of dog theft. During this period, I held a meeting with Cambridgeshire Constabulary and local councillors to discuss what more could be done to tackle it. Whilst the theft of a pet is already a criminal offence under the Theft Act 1968 and the maximum penalty is seven years’ imprisonment, when a stolen pet is mistreated, offences under the Animal Welfare Act 2006 of animal cruelty or failure to meet an animal’s basic needs carry further punishments. I appreciate that some constituents are concerned that the penalties for dog theft are not severe enough and I have raised this with the Minister responsible for sentencing.

Following a significant increase in crime and disorder in Willingham, I held two Extraordinary Public Meetings with the police in 2018. At the first meeting was held on 20th September and immediate steps were taken to address the concerns highlighted by the many residents who attended.  At a second public meeting on Saturday 1st December, the Police were able to report back to the community on the significant progress made.

Following the meeting in September, steps were taken to revisit crimes filed in the village over the summer.  Due to this proactive work, a vehicle connected to burglary offences in the Fenland area has been recovered, and a further vehicle seized that was stolen from the East Cambs district. As part of the operation two serious crime groups who had been committing crimes in and around the area were convicted.

In addition, Operation Redford took in November 2018 in which officers entered the Black Pit Drove traveller site in Willingham and searched several caravans under warrant.  A number of people were arrested, a substantial number of neglected animals were rescued and a stolen caravan, a stolen motor-vehicle, several stolen quad bikes and a number of stolen power tools were recovered.

This activity demonstrated to the local community the police’s commitment to prevention and detection of crime and disorder in Willingham.