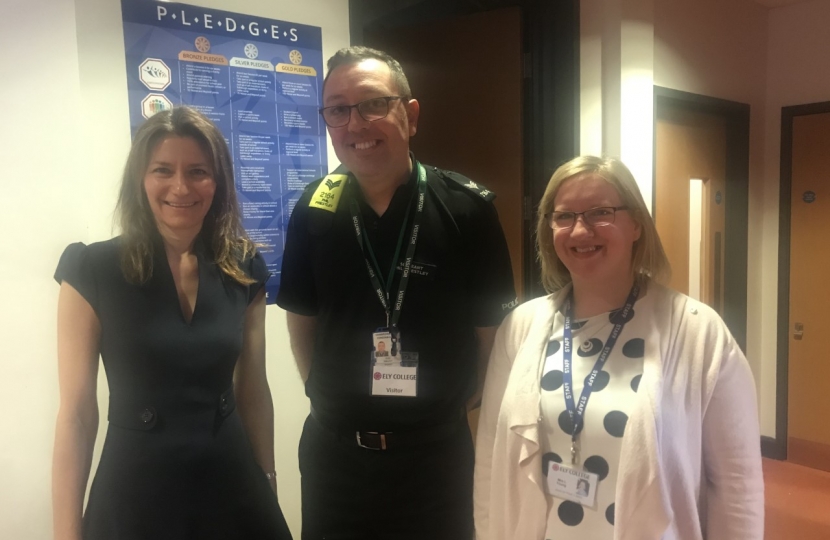 The current spate of knife crime is deeply concerning. Too many tragic deaths have occurred and there is, without doubt, an urgent need to tackle the problem. There is no single solution to the issue and the Home Secretary, Sajid Javid, recently set out a range of measures to help combat the rise in knife crime. These include a combination of a law enforcement response, early intervention, police funding, the Drugs Misuse Review, and the announcement of a new statutory public health duty to combat violent crime.

Within our own community, action is being taken to educate young people about the dangers of knives. Sergeant Phil Priestley and a specialist team of officers recently took their newly devised project around knife crime to Year 8 students at Ely College. The workshops which dealt with knife crime, county lines drug dealing, cyber safety and conflict and de-escalation, were filmed so that they can be reenacted in schools around the country and also shared online.

Sergeant Priestley is also the inspiration and driving force behind the Cambridgeshire Youth Consultation Panel, formed in June 2016. The panel, made up of a collective of young people aged 13 to 16, came to Westminster last year to discuss knife crime and youth violence with me and to ask for my support in a bid to the Home Office for additional funding to tackle the issue.

I was more than happy to support their bid and support Sergeant Priestley’s proactive engagement with and dedication to our youth.

Much is being done at government level to address youth violence. The Serious Violence Strategy, published on 9 April 2018, puts greater focus on steering young people away from a life of crime, while continuing to promote a strong law enforcement response. Making funding available for local initiatives such as those being delivered in our community is key.

Too many young lives are being taken. It is vital that young people are prevented from going down the wrong path early on, that they are educated about the dangers of knives and that we fully understand the root causes prompting some young people to feel the need to protect themselves with knives.

A national strategy for tackling knife crime is paramount but local, community based projects are game changers and I am proud that our local police are setting the agenda and leading the way with this.