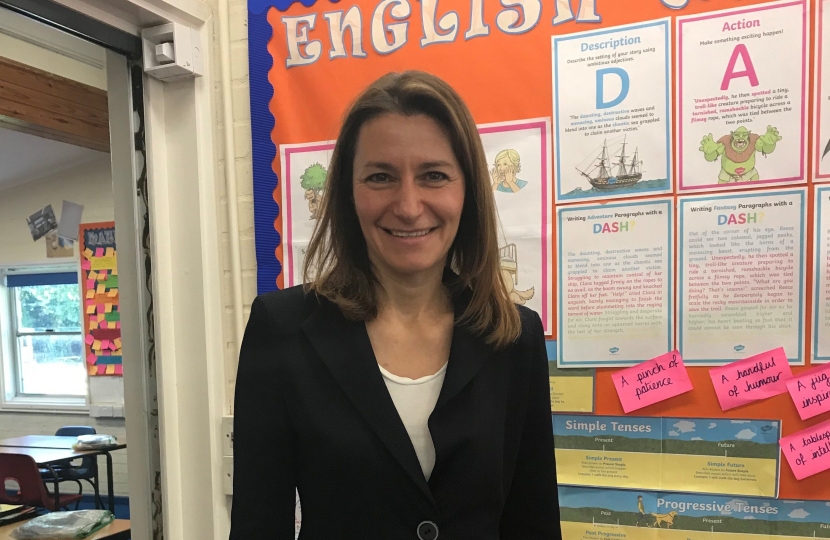 South East Cambridgeshire MP, Lucy Frazer, has welcomed news that a free to use, teacher recruitment initiative, she championed is now open to all schools across the country.

Teaching Vacancies, a website to advertise full, part-time and job-share roles, has been piloted in Cambridgeshire and the North East over the last year.

Lucy also promoted this service with schools in her constituency who were amongst the first to road test it during the pilot period.  100% of schools in Cambridgeshire are now signed up to, and actively using the 'Teaching Vacancies' platform to recruit staff.

Following the national roll out, Education Secretary Damian Hinds has called on all schools to take advantage of this new, free way to advertise teaching vacancies and invest the millions spent every year on recruitment back into teaching.

Speaking about the roll out, Damian Hinds said, “The national launch of ‘Teaching Vacancies’ follows a successful pilot in Cambridgeshire and the North East. The success wouldn’t have happened without the efforts of South East Cambridgeshire MP, Lucy Frazer, who championed this initiative from the outset. I am extremely grateful for her support and commitment which are further evident in the fact that 100% of schools in her constituency are now signed up to, and benefitting from, using the service.”

By signing up to the service, schools will cut down on up to £75 million spent every year to advertise jobs. The launch comes ahead of 31 May, where there is often a peak in the number of teachers who hand in their notice, if they want to switch jobs next year.

Lucy Frazer MP, said “Since being elected four years ago, I have spent a lot of time visiting schools in our constituency. Time and time again the cost of recruitment came up.  I highlighted the issue to government and also proposed a solution. I am therefore delighted that the idea to create a free to use digital recruitment platform for schools is now a reality. I am also grateful to all the schools in my constituency who supported this initiative and played an active role in the pilot which has led to a full national launch. This is an exciting initiative that means previous costs on recruiting can now be spent on teaching.”

The Education Secretary has told schools they should immediately switch to the new, free-of-charge service. He said, “Teachers are the beating heart of our education system and school leaders want to make sure they recruit the best to inspire students. But finding the best has become very expensive.

This announcement is the latest in a series of steps taken by the Department of Education to help schools clamp down on costs and ensure resources can be targeted at the frontline, including:

These steps underpin the Secretary of State’s commitment to champion the teaching profession – having launched the first-ever integrated recruitment and retention strategy – and to make a strong case for education spending across Government ahead of the next spending review.