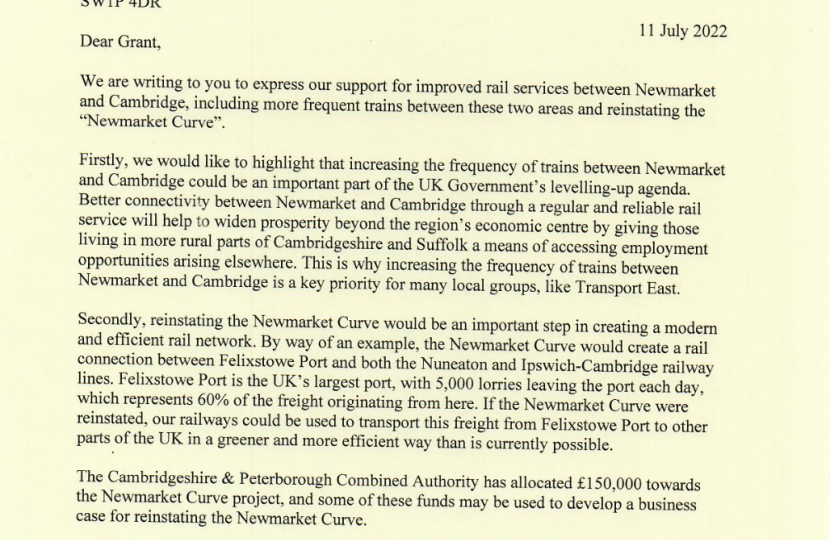 Along with neighbouring MP Matt Hancock I have written to the Secretary of State for Transport, Grant Shapps MP to express our support for improved rail services between Newmarket and Cambridge.

Increasing the frequency of trains between Newmarket and Cambridge could be an important part of the 'levelling up' agenda, with better connectivity playing a part in widening prosperity beyond the region's economic centre and encouraging trade and travel.

Reinstating the 'Newmarket Curve' could help build a modern and efficient rail network and, by way of an example, could create a rail connection between Felixstowe Port both the Nuneaton and Ipswich-Cambridge railway lines. Felixstowe Port is the UK’s largest port, with 5,000 lorries leaving the port each day, and representing 60% of the freight originating from here. If the Newmarket Curve were reinstated, our railways could be used to transport this freight from Felixstowe Port to other parts of the UK in a greener and more efficient way than is currently possible. The Cambridgeshire & Peterborough Combined Authority has allocated £150,000 towards the Newmarket Curve project, and some of these funds may be used to develop a business case for reinstating the Newmarket Curve.

We are seeking a meeting with the Secretary of State and other stakeholders to discuss these ideas and how better rail services can be delivered for our constituents.

In the last few months, Sunnica has pressed ahead with its plans to build the largest solar farm in Europe in our area, despite the majority opposition of my constituents. I know that concern is widespread, and many fear the impact that this solar farm would have on their daily lives.