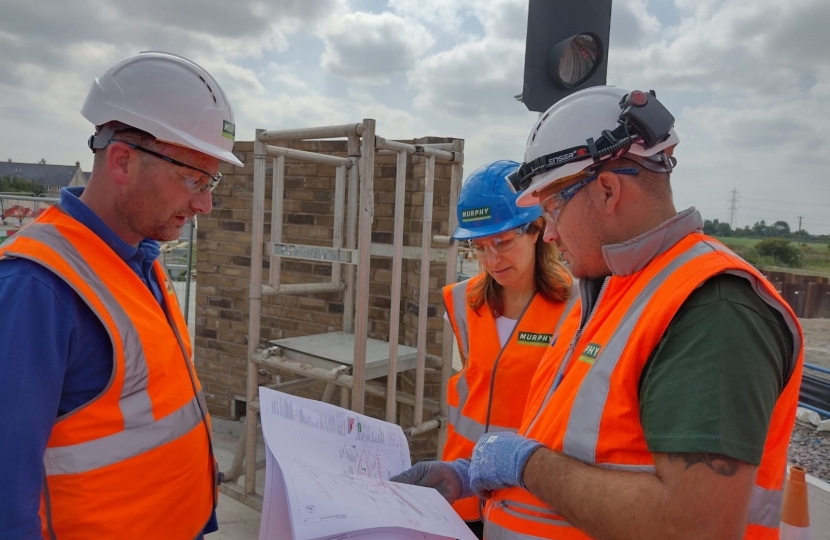 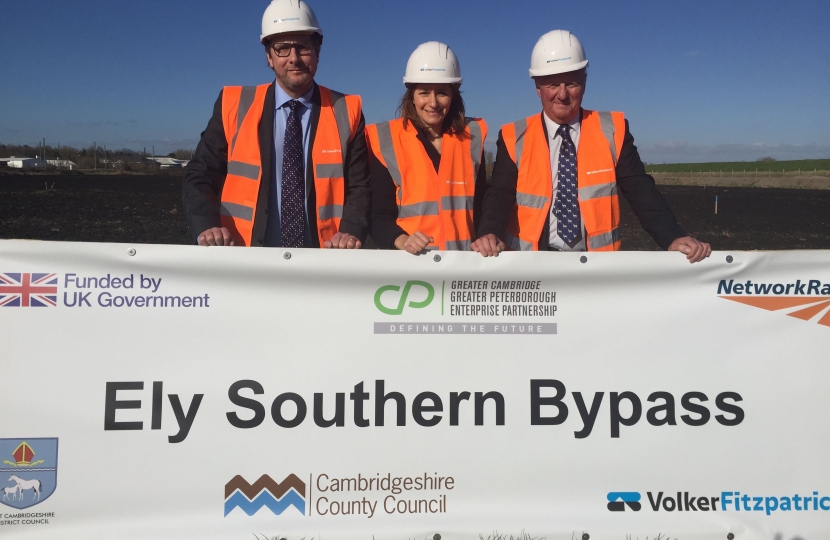 Investment in infrastructure is needed in South East Cambridgeshire and Lucy has been taking action to ensure that our local transport links are improved.

I have been campaigning alongside the previous Mayor of Cambridgeshire and Peterborough, neighbouring MP Matt Hancock, and Cllrs Steve Count and Colin Noble for investment in Junctions 37 and 38 of the A14.

These junctions serve an area in which there is significant economic and population growth – East Cambridgeshire is one of the fastest growing districts in one of the fastest growing regions in the UK, which is delivering significant numbers of new jobs and considerable demand for additional housing. It is therefore essential to invest in improving capacity at these junctions to alleviate severe congestion and ensure the appropriate infrastructure is in place.

I wrote to the Roads Minister to again press for clarity as to when the results of the Government’s consultation into the Road Investment Strategy 2 (RIS 2) will be published. It is hoped that RIS 2 will offer a valuable source of funding for the package of capacity and safety measures required at Junctions 37 and 38.

Cambridgeshire is one of the fastest growing economic regions in the country, and as such, improvements to the A10 are vital. It is crucial that our infrastructure keeps pace with other developments, and with significant new housing developments planned in Waterbeach, Ely and across the Cambridgeshire region, it is important that our local infrastructure and communities can withstand and support this anticipated influx of growth.

Since being elected as MP for South East Cambridgeshire, I have been consistently contacted by constituents with concerns about the delays and traffic on the A10. Residents of villages in the constituency have also expressed concern about their communities being used as a rat-runs by drivers to avoid the A10 at rush hour. Even with planned improvements to our rail links, including new stations at Soham and Waterbeach and substantial investment to encourage active travel, analysis shows that significant queuing and delays will remain on the A10.

The Cambridgeshire and Peterborough Combined Authority submitted a bid in 2019 to the government’s Large Local Majors Programme for funding for junction improvements on the A10. I was pleased that the Government announced at the Spring Budget in 2020 that the bid had been successful.

I have campaigned for many years to improve the A10. A petition on my website collected over a thousand signatures in favour of improvements to the road. I have also regularly raised the issue with ministers and officials at the Department for Transport as well as with the current and former Chancellor.

But the junctions are not the whole picture and I am pleased that the Combined Authority are working on plans to dual the road. Following their recent virtual consultation event (https://cambridgeshirepeterborough-ca.gov.uk/about-us/programmes/transport/a10/), the Combined Authority plan to hold further face-to-face public meetings over the coming months. As part of the development plans, I know that the Mayor, James Palmer is conscious of the importance of the environment, and all potential options will be assessed against effect on traffic flow, junctions and other roads; social, economic and environmental impacts, and value for money.

It is my view that improvements to A10 can help bring about a better quality of life for residents across South East Cambridgeshire, as well as provide additional infrastructure to support our growing economy.

The Ely Area Improvements Programme (EAIP) intends to solve chronic capacity and connectivity issues on the region’s railways by unlocking the potential of Ely Station to help deliver jobs and enhanced economic growth to the Eastern Region.

Delivering the EAIP is a key priority for the Government and local MPs are working closely with the Mayor of Cambridgeshire and Peterborough, Network Rail, and the County Council to deliver the project. I supported their efforts whilst taking every available opportunity to represent the views of my constituents.

In particular, I pushed for the doubling of the Ely to Soham line to be included in the project so that it is funded and completed at the same time as the EAIP.  This is vital to realising the maximum economic gain from the EAIP, tying it with the construction of a new station in Soham, as championed by the Mayor, and ensuring that the new station will have the bandwidth it needs to deliver jobs and prosperity to the heart of the constituency. I continue to press this point with the Transport Secretary and Network Rail.

I share the concerns of residents in Queen Adelaide and Prickwillow about the impact the EAIP might have on level crossings in the area. An issue has arisen because the level crossings, operating as they do currently, might restrict Network Rail's ability to deliver the EAIP.

I am delighted that the County Council has so far listened to the representations that I and others have made in this regard and that it has subsequently decided to focus on delivering alternative infrastructure, such as a road or a bridge, to preserve access to jobs, vital services, and facilities in Ely and the surrounding area. This is an important step towards delivering the considerable benefits of upgrading Ely North Junction without isolating Queen Adelaide and Prickwillow.

I will continue to work with the Combined Authority and other key stakeholders to develop the EAIP proposals in more detail.

After 55 years, rail connection will finally be brought back to Soham. I have been campaigning for a station in Soham for a number of years and have worked closely with James Palmer, the Mayor for Cambridge and Peterborough to help deliver it.

Soham is a growing town and needs a rail station to better connect people to the rest of the county and beyond. Reconnected to the national network, Soham will be part of greening the Cambridgeshire transport system, it will attract additional investment, further jobs and both commercial and social opportunities.

Construction work on Soham Station continues apace, and it was fantastic to visit the site last week. Local residents and rail users will know that it is the first station in the town for 56 years. Staff from Murphy assured me that construction is going well and is on track for its opening on Monday 13 December. Greater Anglia’s Ipswich/Peterborough service will start to serve Soham station following completion of the new station.

Work began on the Ely Bypass in January 2017 and the new mile long road is now open.   I campaigned on this since before being first elected in 2015 and worked closely with the Mayor of Cambridgeshire and Peterborough, James Palmer, the County Council, the District Council, the Local Enterprise Partnership and the Department of Transport to ensure Government funding for the project.  The Bypass will deliver a reduction in congestion, bringing with it significant economic benefits, cutting travel time and improving transport links in the area.

I will continue to work on these campaigns until they are all delivered.